At the London Build 2017, we launched our lighting design service with a focus on lighting for wellbeing. It was here that we showcased through the power of VR our concept of a Human-centric office. In particular, we wanted to highlight the design techniques and lighting technologies available today to provide a lit environment that works in harmony with our natural biorhythms. In addition to this wanted to demonstrate three core principles on how we approach lighting for the workplace:

-Lighting for visual task and comfort
-Lighting that extends the feeling natural light of the outdoors
-Lighting to help the occupants keep in sync with their biorhythms, the Circadian Rhythms

What was interesting was to see how people reacted to experiencing an office space using conventional lighting vs our well thought out ‘Human-Centric’ Lighting approach. We enlisted the help of Andrew Gardiner of Gardiner Design (http://www.gardinerdesign.co.uk/) to create an office plan that took the best of today’s desking systems with a view of creating a breakout and soft seating space that would encourage occupants to move around and work on their feet. It also was to be a place where staff would feel comfortable being in throughout the day and, possibly, late into the evenings. This furniture plan remained the same, but the lighting changes from our dynamic lighting to the usual industry standard 600 x 600 grid lighting, and the results a clear to see below…. which space would you prefer to be in?: 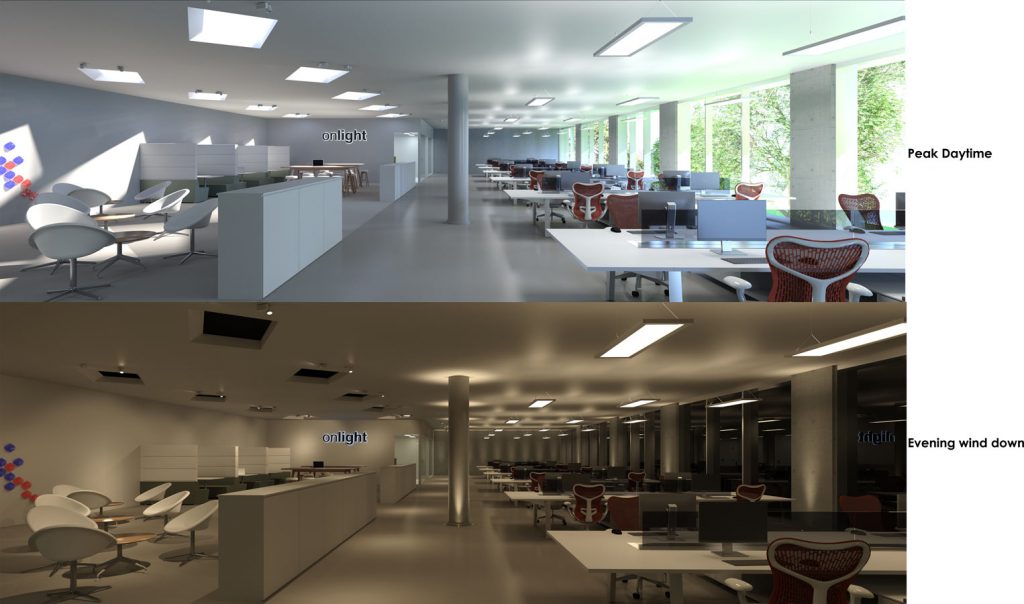 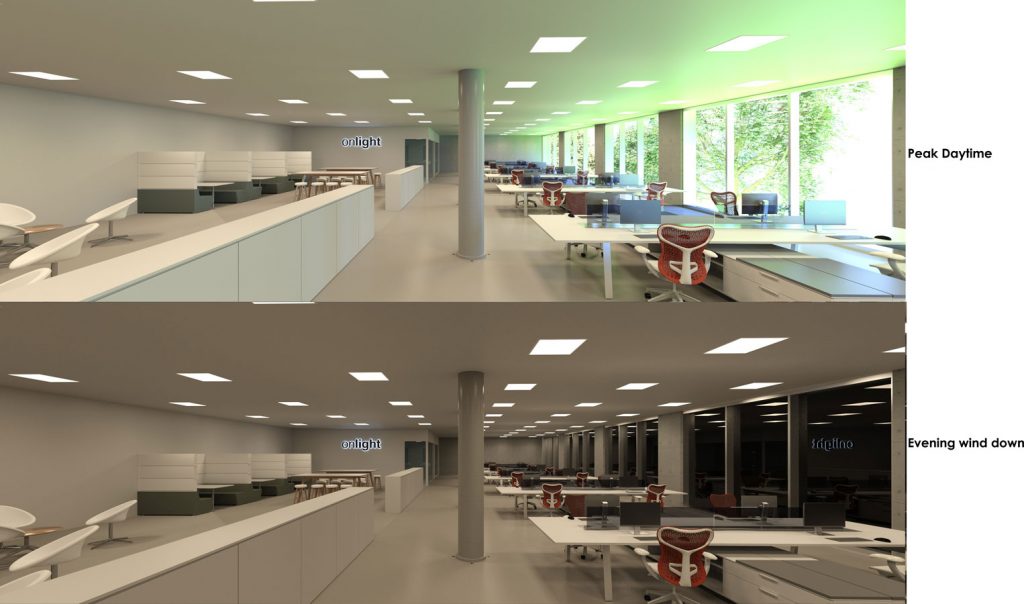 It’s recognized more now than ever that the traditional office space has not been the healthiest place for people to work. It’s almost humorous to think one of the biggest causes for back injury is the office chair! That’s right, we are suffering more from back problems just by sitting all day! This is a real issue recognized world over, spending time in a posture that the human body was not designed to be in during the day for prolonged periods of time, and doing so in an enclosed environment with. This is taken so seriously now that it is almost compulsory for HR departments to train staff on how to set their office chairs for best posture and have to take seriously if a member of staff is not comfortable with their sitting arrangements. More and more now the use of stand up desks is becoming popular with well thought out plans to keep people moving. It’s great to see moves being made to help overcome the physical issues caused by workplace set up… but what about the physiological and biochemistry state of the person working within indoor places? Surely it’s not just the physical state that suffers from the fact we are no longer in the outdoors during the peak performance period of the day?

This is where lighting comes to play. Whilst we can create workplaces that cater to the physical needs of the Human body, there can be no Human-Centric space without Human-Centric Lighting! When I started exploring the notion of HM lighting, a great mentor once said ‘to understand the effect of light on humans, first, you must understand the human!’. And thus we begin… 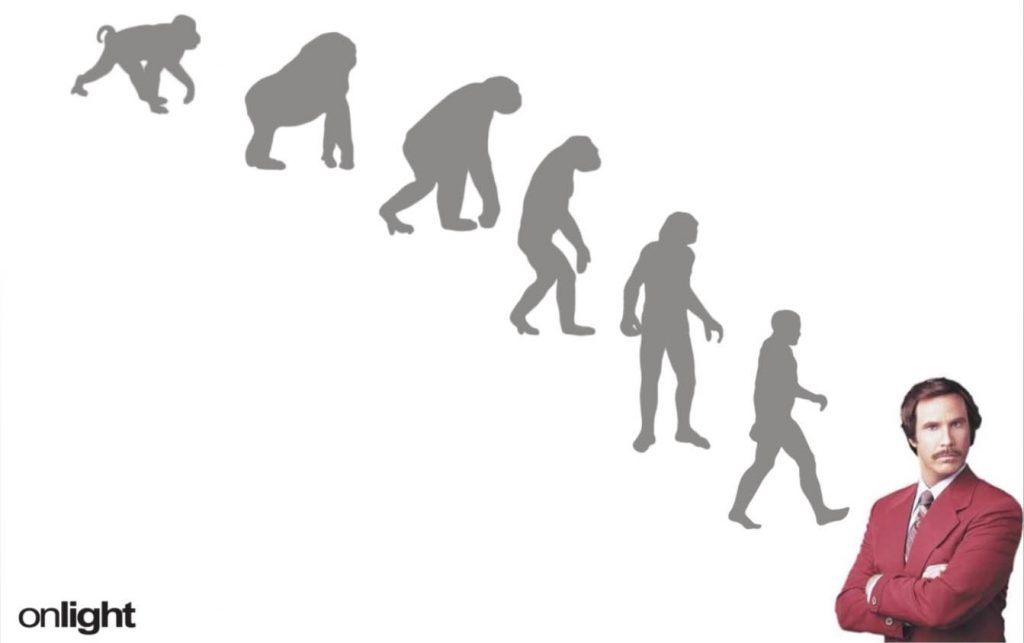 Humans have evolved from one form to another on this planet over millions of years with our visuals system and sensory organs tuned to pick up what is needed for the purposes of survival, mostly in the great outdoors. Humans actually are predominantly an outdoor animal, with the need for shelter for safety during the night. 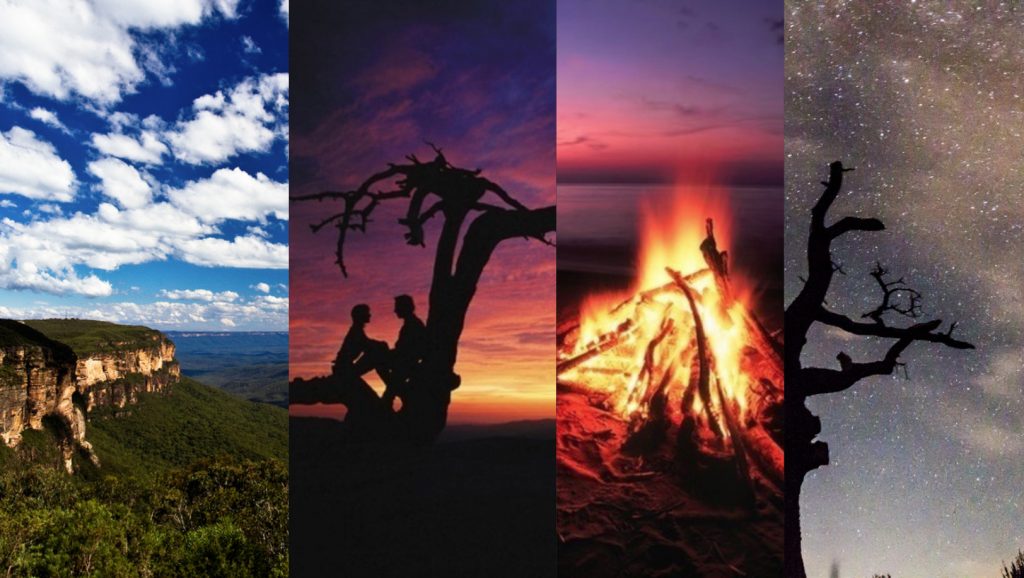 During the evolution of all animals on this planet, there has been one single constant; the 24-hour day-night cycle. The predictability of the constant sun rise and sun set gave nature a chance to build in all living animals a unique reference point of operation, the biological clock. All living creatures on earth have a form of an internal clock, and we are all hardwired over the millennia to operate with this 24 clock. In humans, the clock is a part of the brain known as the Suprachiasmatic nucleus, and this is the master clock that controls our Circadian Rhythms. And what regulates this master clock? Light and darkness! 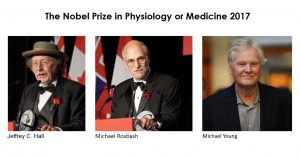 Thanks to the great scientists above and the many others studying the subject of Circadian Rhythms, we now know that our circadian rhythms are the reason we sleep and wake on a 24 cycle, but that’s not all. Scientists are now recognizing that every organ and every cell has an optimum operational time. This makes sense, as creatures of the day, we need to be operational during daytime with our recovery and rest period taking place during the night. For example, our muscles are at their optimum towards midday and after, our alertness peaks around 4-5pm. 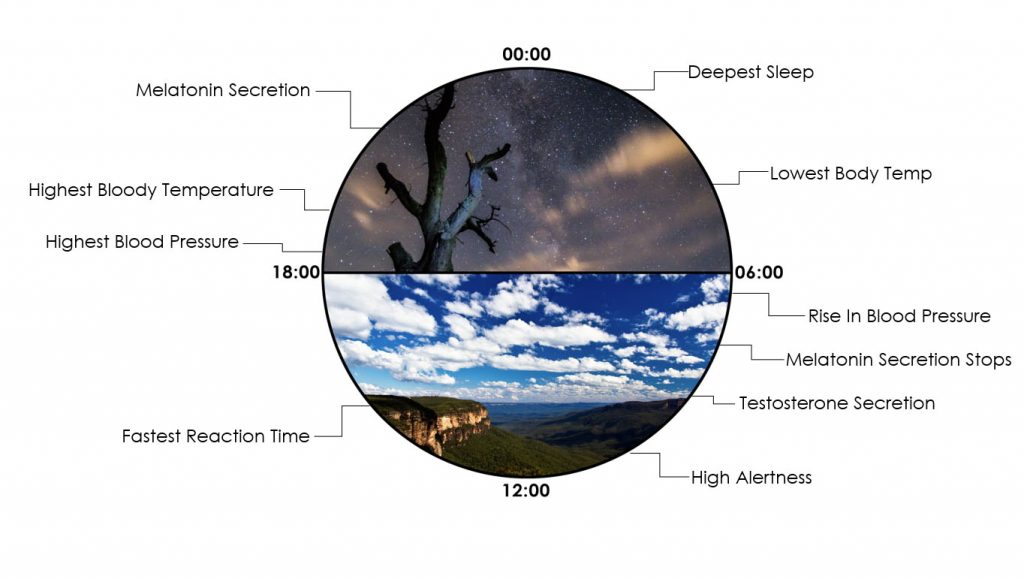 During the night is when we’re programmed to sleep, with oncoming darkness and lowering light levels signalling the brain to release Melatonin which is the hormone that induces sleep. The importance of sleep is greatly studied now. This is when our cells regenerate and recover the most, our brains re-organize memories and recovers as does our muscle cells and fibres. Importantly, it’s also throughout the sleep stage that our immune system recovers, ready to keep protecting and fighting for us the oncoming day ahead. Without healthy sleep and restful sleep, we are simply not at our optimum during the day. We also know the lack of or disrupted sleep degrades the bodies ability to function and protect itself, giving rise to the chance of disease taking hold.

And on the flip side to sleep, we have our wake state. During the early morning, with the rising sun and increased light levels, the brain is signalled to phase itself out of sleep by suppressing the release of melatonin and starts the release of cortisol amongst shifting other hormones to wake us up. Going through this cycle naturally, would normally result in feeling rested and ready to take the day on. Daylight is the signal to the brain it’s

With the above in mind and knowing that the right light at the right time entrains out brain to maintain a healthy routine of wake and sleep, imagine then what happens every day when we walk and settle into a monotone and underwhelmingly lit office which cuts us off from the abundant daylight? Quite often, the everyday office lighting products and implementation don’t respect the fact that humans are hardwired to expect daylight exposure at the time that matters to signal the Human body it’s time to wake, eat, work, play and live!

If you like to learn more how you can use simple lighting design, coupled with todays lighting and controls products, to produce a real lighting environment that helps you keep in harmony with your natural biorythms, call onlight anytime on 0208 090 1413.